The story of the Booth Hall babies and Calderstones role in protecting the most vulnerable members of society, especially during the early years of the Second World War, was revealed during the recent research of the Cemetery. Apart from the burial records at the Hospital, very little information had been retained and even the 99 year old Elizabeth Thompson, since deceased, our oldest and perhaps best informed contributor, was unable to assist with details. Much more detailed records were available in the Reference and Archive Sections of the Manchester Central Library, the assistance and guidance provided by the Central Library staff has given us a much clearer understanding of events..

The details of the babies 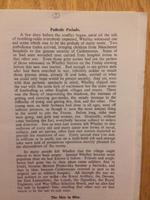 This contemporaneous description of the Booth Hall babies' arrival at Calderstones was only recently discovered. It had previously been assumed that the transfer of the children had been achieved via road transport, but this brief description perfectly reflects the grim reality of that transfer. At this time, it is not known if the two ambulance trains proceeded into the Hospital's own station and sidings or discharged their patients and passengers at Whalley Station, over half a mile away from the nearest Ward.

Still clearly visible on this snowy day, it is noticeable  that the graves of the children are in perhaps the most prominent site within the cemetery. They would be the first graves which any visitor would see.

In April 2021, Brian Revie from Pinac began producing  a series of short films about the Calderstones and Brockhall cemeteries. The history and graves of the Booth Hall babies feature frequently in the films, with one being dedicated to ensuring that the babies will not be forgotten.  The link is youtube.be/VyS4NZpHRSU or simply google Pinac-Booth Hall babies.

Brian Revie with the support.of volunteers and crowdfunding 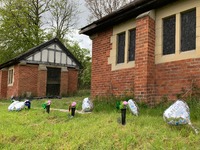 This photograph shows the six Booth Hall babies graves in front of the RC Chapel. The overgrown vegetation has been cleared, the intact and undamaged bases of the original headstones exposed and each grave now has its own personal memorial plaque and flowers, which were provided via a crowdfunding appeal. Brian Revie was responsible for the idea, organisation and all the work involved in establishing these memorials.

In contrast to so many other parts of the "Abandoned Cemetery, " the graves of

which appear left to right in the photograph are now clearly identified and respected.

We use cookies to enable the proper functioning and security of our website, and to offer you the best possible user experience.

You can customize your cookie preferences here. Enable or disable the following categories and save your selection.